It’s time for some MangoPi MQ Pro Benchmarks! It’s been a little while since mine arrived and I’ve now put the 1GB RAM model through a mixed bag of tests (thanks to balbes150 and his work on the Armbian builds) to see how this little RISC-V board measures up.

I should start this off by saying that unfortunately my first board (1 of 10 initial 1GB RAM models) arrived with a strange issue which meant it got extremely hot (too hot to touch even) within seconds and did not boot. The MangoPi guys were willing to send a replacement and I received one of the new Sakura Pink batch that was manufactured 3 weeks later so I can’t complain about that. They seemed to be genuinely sorry and wanted to make things right!

The Sakura Pink MQ1PH is a lovely looking board and the 1st for me with a RISC-V CPU so I was extremely curious to see how it performed. Given that it’s quite close on paper to the Raspberry Pi Zero W if you look at the pure numbers and form-factor, it was nice to have a new alternative.

The build quality seems solid and the choice of USB-C instead of microUSB is a very welcome one. For those of you interested in purchasing one for yourself, they do come with a set of colour-coded (Raspberry Pi 40-pin compatible) GPIO headers which don’t necessarily require soldering due to the very snug fit once in.

For these benchmarks, the boot storage is the best-performing Amazon Basics 64GB microSD card and the SSD is a Samsung 850 EVO (500GB). For USB Ethernet, I use the Linksys 1Gbit USB Ethernet adapter. A 120mm fan is blowing across the board for all tests (unless mentioned) to ensure no thermal throttling takes place.

As always, I’ll start with UnixBench. The MangoPi MQ Pro is a single-core board so we only have the single-core scores throughout these tests. Interestingly, they swing for and against the MQ Pro when compared with the Raspberry Pi Zero. The rest of the benchmarks are various compute tests for a series of languages that users of this board may want to run, along with some that may not be too relevant to all. I’m working on the tests to run in future so all feedback is welcomed!

It should be noted that we are testing the 1GB RAM model of the MangoPi MQ Pro here. If you compare to a 512MB board, your results will differ!

Straight out of the gate we’re seeing decent WiFi performance from the MQ Pro, without the need for any additional antennas (I’m looking at you, BananaPi M2 Zero!) though as it comes with a port for one I did give it a try. With my test parameters (1m away with direct line of sight to the UniFi U6-LR) it didn’t make much of a different to performance. When I moved it to 5m through an internal wall, it was within a margin of error so that’s a positive sign.

The micro SD card results are taken from my Best SD Cards for Raspberry Pi & SBCs piece and show that in comparison to other similar boards, the SD card reader isn’t exactly the speediest of things. With the board’s limited compute resources though, this shouldn’t hold it back too much.

For this comparison, a USB-C to SATA adapter was used with a Samsung 850 EVO 500GB SSD attached. The SD card readings are an average of the above table’s data.

I tested with 2 different models/brands of USB-C to SATA adapter and threw in an older Samsung 840 EVO SSD to see if there was something strange going on with these results but both saw the same. The sequential read speeds on the USB SSD were consistently much higher than everything else, which only looks weird when you consider the sequential writes. Each and every test showed the random writes to be higher than the sequential writes. This meant that the SD card beat out the SSD in that regard, though that doesn’t take into account reliability.

Interestingly, I was unable to get much of a delta out of my usual stress-ng test here so I tried with a yes test and a large file encode and saw the same results. All tests were performed in a room with an ambient temperature of 25.8 degrees celsius (measured 1m from the board)

Our good friend stress-ng --cpu 1 gets another run out to help judge the power draw here and I’m surprised by how little power it seems to sip, even under 100% load. I tested with 2 power meters, 2 PSUs and a couple of different USB cables too just to be sure and everything matched up. Whilst booting, I did see a peak of 1.54 watts! Once settled down though and idle for 15 minutes, we saw 0.62 watts. Under load, 0.87 watts was measured

The MangoPi MQ Pro isn’t going to be everyone’s cup of tea. As it stands, the software support is a little lacking, though as more boards are shipped, we’re seeing more and more work from the community. We now have Armbian, Gentoo and Nerves from what I’ve seen so far so things are slowly getting there. Hopefully, with the launch of their upcoming H616 and ARM Quad-Core boards we’ll see a larger community, more support and more exciting boards to add to the collection.

Price-wise, it clocks in a fair amount higher than similar “Zero” form factor boards so it’s not going to be the greatest option in terms of value if you’re looking for the most power for your money. If you’re looking to try RISC-V architecture with reasonable performance, it’s definitely worth a shot. Rumour has it that they’re planning additional, quad-core RISC-V boards soon too so stay tuned for more information on those! 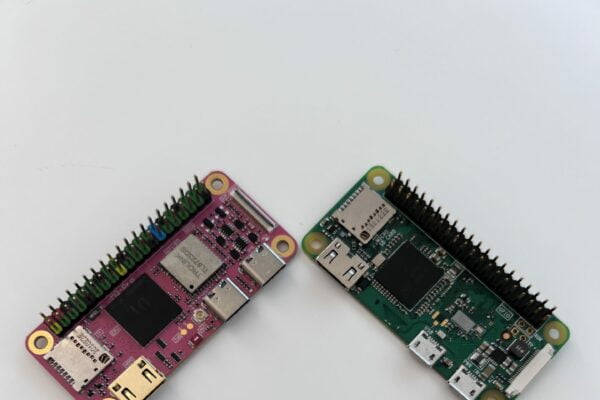 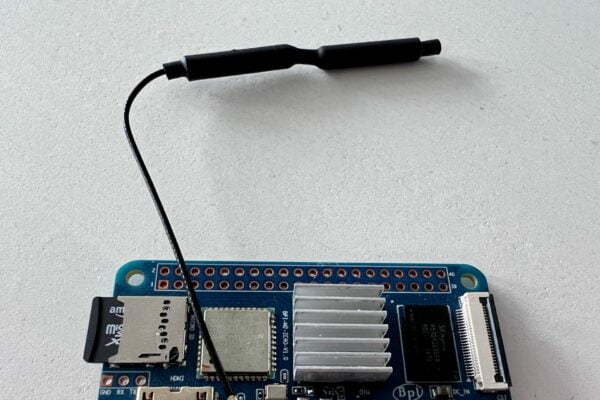 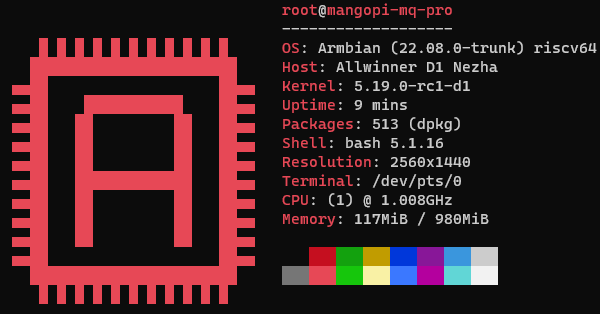 Armbian on the MangoPi MQ Pro!